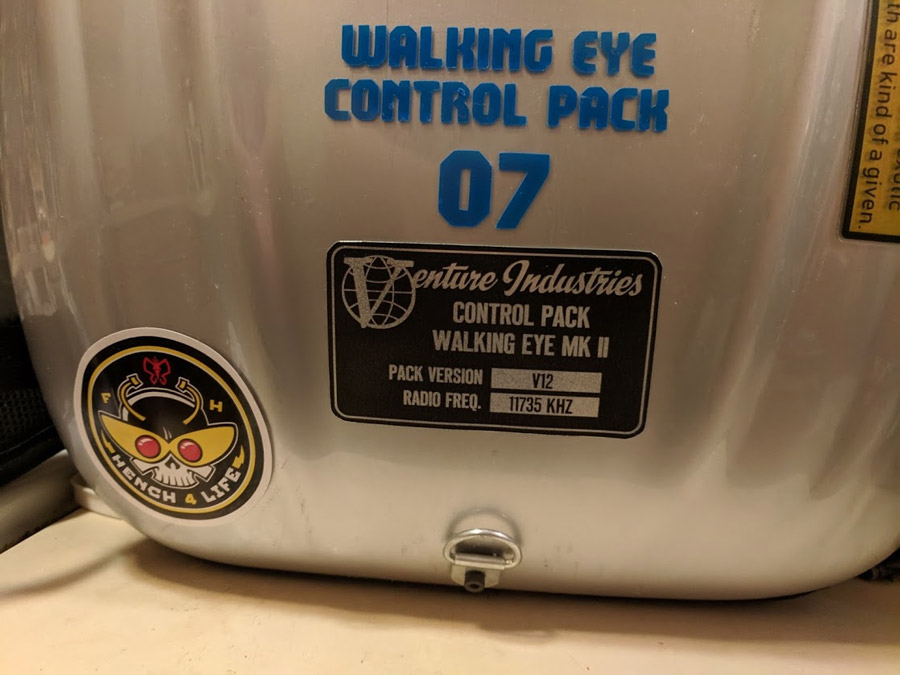 I am a HUGE Venture Bros fan. And I’m also a giant nerd who carries around a customized hard-shell backpack. I started by adding the instrument handles/ears and then just put a bunch of decals on it from various things I liked.

But once I got a vinyl cutter… all that changed. I designed and laid out some graphics and lettering to turn it into a Venture Industries backpack. For a Walking Eye. Good for… stealth reconnaissance. They’re all the same.

The blue graphics are all vinyl (the backpack has a thick gloss shell, so that’s why there’s a sort of drop shadow). The warning labels are printed on clear vinyl to give them a different look. The equipment plate was design in Photoshop and printed on foil sheet. The turbine was scratch built from parts lying around (speaker grille cover, computer fan shroud, perf board, screws, and barge cement). The handles are equipment arms/ears for mounting on electronics project boxes. I use them to attache three bungee cords (note the D-ring at the bottom).

The Hench4Life sticker is NOT my design. I thought it added to the story of the pack. Maybe Gary snatched it from the compound while he was running SPHINX (SPHINX!) and tagged it.

I may add some lights later using some aircraft panel lights I found on eBay and bought a slew of. Still on the fence about that. We’ll see. For now, I just parade around like a giant nerd, trying to track down my missing walking eye.