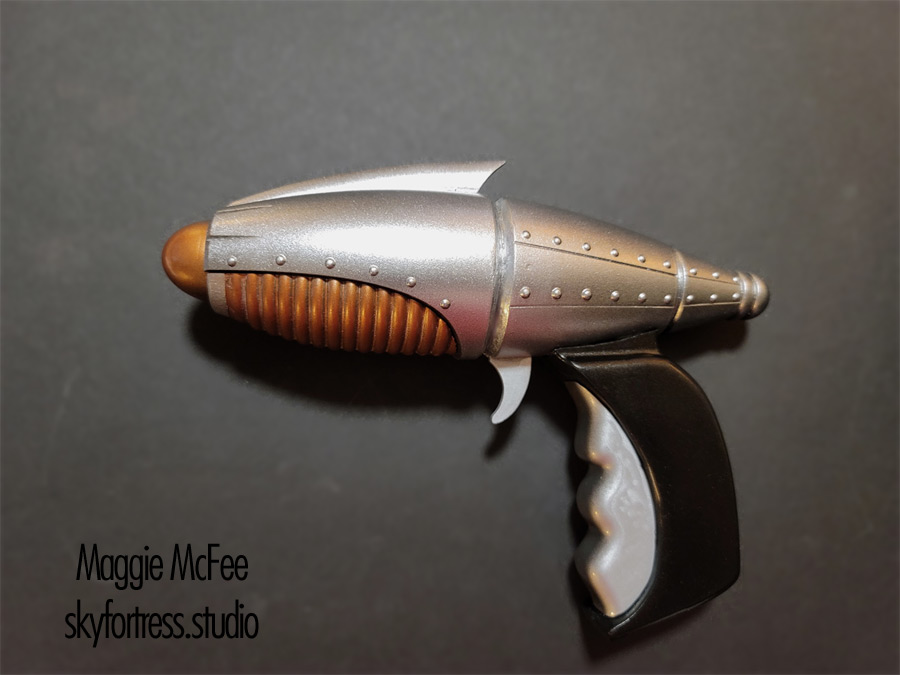 So let me just get this confession out of the way.

I love Kerry Conran’s Sky Captain and the World of Tomorrow. I love it to death, warts and all. Roger Ebert said of the film, “It’s like a film that escaped from the imagination directly onto the screen, without having to pass through reality along the way.”

Well, the imagination in question could have been mine, if it hadn’t been Kerry and Kevin Conran’s. It speaks to me on a very deep level; It’s a film that could have been made just for me. I’m not old enough to remember film and radio serials, obviously, but I did grow up on a steady diet of SciFi — Doctor Who and Star Trek being staples of my diet and, of course, Star Wars — and that diet sometimes included old serials which played on a local TV station late at night as filler for the late night movie. I recall many a night sneaking out of bed to watch Flash Gordon or some other B&W treat quietly in the living room while my parents slept. Hey, they advertised them during the afternoon when I was watching cartoons, how could I resist? Later in life I developed a fascination with old radio serials as well and listened to countless hours of them.

Sky Captain was like a concentrated booster shot of all that: Giant robots, heroes in tricked out aircraft, swaggering female fighter aces, flying aircraft carriers… and ray guns. Sky Captain was a siren call to me in 2004. And there’s one prop from the film I’ve always wanted, in some form or other, but never have found: Dex’s ray gun. Sure, I have the ornament version, but that’s small consolation. Literally. So I decided it was time to make my own and got to modeling. I’ve printed a couple (you will see a very rough initial print, but bear in mind this is me trying things out) to test and hand fit and I’m still tweaking, but it’s about 95% done, I think. I’ve extended the nose cone a bit since I took this screen shot, and fixed the grip, which wasn’t contoured right, but these pics will give you an idea how it’s progressed.

UPDATE: I gave Adam Savage one of my later versions of this replica a while back. So somewhere in his cave (I’ve spotted it once or twice in videos) is one of my ray guns. 🙂 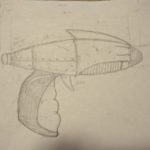 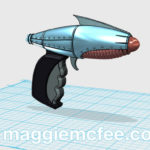 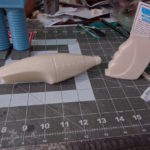 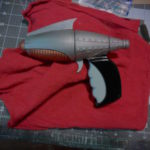 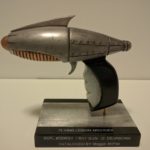 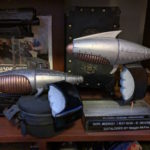